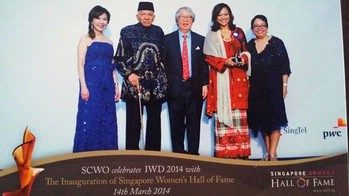 Che Zahara Noor Mohamed has been selected for the inaugural list of inductees for the Singapore Women’s Hall of Fame by a panel of distinguished Singaporeans, led by Prof Tommy Koh. The ceremony was graced by President Tony Tan and Mrs Mary Tan at Shangrila. The Hall of Fame has been established to honour women who have made, or are making an impact on our nation.

The Second World War left many women as widows. Some were forced to turn to prostitution to make money to survive. Against this backdrop, Rita’s late grandma, Che Zahara, continued her work taking care of the welfare of the needy, orphans & women, and she sought to formalise it and founded Singapore’s first Muslim women’s welfare organisation, the Malay Women’s Welfare Association (MWWA), in 1947.

In 1955, Che Zahara represented Singapore at the World Congress of Mothers, in Switzerland. She also worked with the Singapore Council of Women (SCW) to help establish the Women’s Charter of Singapore, enacted by Parliament in 1961. Eventually the MWWA dissolved and Che Zahara joined the SCW.

Rita picked up the award of “Pioneering champion of the rights of women and children” on her grandmother’s behalf.